For those of us old enough to remember, the internet is the elements at the other end of the computer. The door opened by the lightning bolt that struck the key.

We’ve seen it change and grow, from a page that had some lists and flying toasters, to full applications that can now save you hundreds of dollars a year on your insurance, from any number of companies with only one visit!

It has truly become a place for everything and anything. One of the bigger trends in the last few years, and still growing is the Internet of Things (IoT). This idea of the inter-networking of physical devices is going to keep growing, as it can include small items embedded with electronics, vehicles and even buildings. One of the best examples of this is the nest, a small home device that can give you advanced control of your house’s environment from anywhere via your mobile device. Another example of the IoT is media across devices and platforms, taking a video, sharing it to your blog, and disseminating it out to a myriad of services, making it available to a number of platforms, services and devices.

Another evolution of developing is coming along on the script side of things, an old language coming to age in a new internet, making websites and applications run smoother and faster on many different devices, and that’s Javascript. This is due to it’s large ecosystem of technologies, libraries and frameworks, which allow developers to work across more devices and platforms by utilizing the device as much as the server that powers the site, creating a more responsive experience that is flexible in it’s output.

When it comes to User Interface, the bigger new developments for 2017 are in the form of bots, conversational UI and the use of Motion UI. Bots are virtual assistants that reside inside chat apps that can assist in any number of ways, from banking to trip planning, by creating an intermediary between tech savvy programmers and human beings, whereas the idea of conversational UI has a broader approach creating a website that offers up the information in a way similar to what a bot would do in a chat room, bringing a more human feeling to the interaction with the website the user is visiting. Motion Ui is a library with flexible patterns, animations and styles aimed at helping developers create fluid, smooth interactions that integrate between prototypes, websites and apps.

A continuing trend is and always will be the evolution of web design, as bots, and ai and scripting languages continue to change and grow the landscape of the internet, design will change and adapt, as can be seen on the growth of single page sites where they are needed instead of multipage sites and the integration of video, or virtual reality into sites. This process also leads to another important trend to watch in 2017, which is collaboration between Design and Development, a part of the internet puzzle we tackle here at Stellar Blue on every project, as we have an in-house design department that works closely with developers on every step of the project from start to finish to deliver a strong, website with longevity to allow for the growth of the internet.

Still have questions? The Stellar Blue team is happy to help! Contact us to find out more. 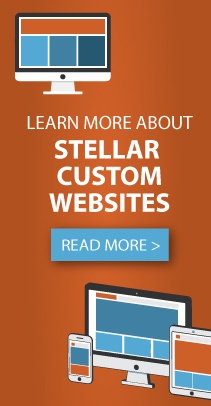