Thanksgiving officially kicked off the holiday season by providing a healthy dose of family, football and stuffing…. Lots and lots of stuffing.

But with this feast-full holiday in the past, people have already made extensive efforts towards chipping away at their Christmas shopping list (cough, Black Friday, cough). Are you one of these early shoppers?


Even if you are not, this holiday season is chock-full of awesome, futuristic-style gifts sure to make you feel that you can finally fit in with the Jetsons – sorry Fred and Betty Flintstone.

You can certainly expect, to see some of last year’s big hits like the hoverboard and Fitbit while also including some new products that have been gaining quite a bit of steam heading into the season of gift-giving!. Here are some tech gadget gifts that when you are making your list, you will want to check it twice to make sure you have included them!

We used to think, “Gosh, can you imagine being right in the middle of the action?” Not so much a myth and more of a reality is, as fitting as the name, Virtual Reality. This holiday season you can quit wishing and starting being with an assortment of options!

Many of the large retailers have released their version of the technological revolution with products like Sony’ Playstation VR, Facebook’s Oculus Rift, Samsung’s Gear, HTC’s Vive and much more. Currently, the market is loaded with plenty of options and price points that make VR’s availability affordable to most budgets! With the anticipation that avid gamers will be marching down to their local electronic retailers to give the new hardware a shot, this product is going to be a hot ticket. Will you be the next one to enter the world of VR?

Drone Technology
Maybe not the newest tech on the block, drone technology is still a force among popular gadgets. These aerial toys are propelled by apps and skilled human drivers. Well, skilled may be used loosely here, but we digress. Drones were a huge hit last year as they were bought up by nearly every skill level from child to pilot and there isn’t much evidence to suggest that this trend won’t continue during Holiday Shopping 2K16.

With new camera capabilities and video-inspired ideas, drones are poised to be another hot ticket item as they catch some of the most impressive video footage you can find on the internet. Another selling point worth mentioning is that drones are also an affordable gift as prices for them can go as low as sometimes $20 – $30, although one may need to front a little more money for better quality and reliability. Regardless the price, drones are still going to sell and sell a lot.

Tech Connected Toys
The younger generations are growing more accustomed to using intricate technology and it is beginning to in the array of tech toys available to them. The appeal of having an interactive toy that is powered by an app on your phone is causing the popularity of these toys to jump through the roof. And because it is the holiday season, parents are willing to shell out the cash for these gifts.

While there are plenty of cost-friendly options, there is also a multitude of toys that can make you dig deep into your wallet. Take for instance the Cozmo, described as a “real-life robot like you’ve only seen in movies,” Cozmo is an interactive playtoy that evolves it’s personality the more you play and interact with it. We can’t make this stuff up! We should tell you, though, this little robot pal retails at $180. Cozmo is one the higher end gadget buddies but the price won’t stop those from rushing shelves pick one up!

Wireless Smart Speakers
What can basically be considered your at-home personal assistant that is capable of “sending Tina some roses,” (we can’t get enough of that commercial), these hands-free voice-automated wireless speakers are leading the way in the tech gift department this season. Products like Amazon’s Echo and Dot and Google Home are in-line to make a big impact on the AI home control system market.

As far as pricing goes, these speakers are relatively affordable when it comes to the quality and capability these devices have. Amazon’s Echo comes in at a reasonable $179 while it’s younger and smaller cousin is a shocking $49. Compared to the number one competitor of Amazon’s, the Google Home which comes in at $129, these products are widely considered to be the most popular product this season. Not only do these speakers play all your favorite music by simply, and politely, asking it to, it is also it’s connectivity between voice and home that makes it so appealing. We can’t wait!

Here at Stellar Blue, we love our tech toys. If you have some cool tech device capabilities you would like to share with us or want to know how you can integrate these products into your marketing strategy, send us a message at info@stellarbluetechnologies.com. From us to you, be safe, enjoy the weather and happy holidays! 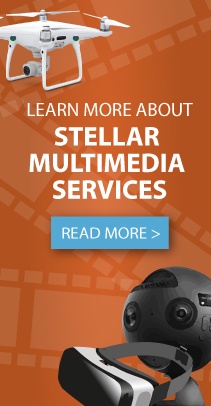